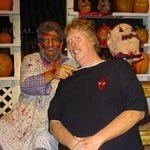 By dkrfla,
June 1, 2011 in Music of Halloween Horror Nights - Orlando

So there's been this certain piece of music that I heard in the Grown Evil scare zone on multiple videos and recordings on YouTube, as well as when I went that year. I could never find out the name of