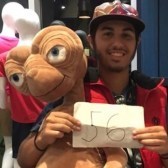 If Halloween Horror Nights were to make a new icon for HHN 26, what would it be?